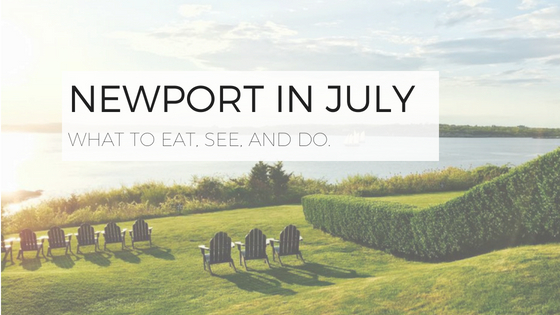 As June draws to a close, summer in Newport is officially underway. Cue the fireworks, festivals, and endless fun. July in Newport marks our favorite time of year with a series of summer events that make the City by the Sea such a beloved vacation location.

Fourth of July Festivities: July fourth is much more than another day in the Newport area.

With the oldest fourth of July celebration, Bristol takes Independence day seriously. Start the day at 10:30 by celebrating at the parade. Later, enjoy fireworks over the Newport Harbor from the best spot in town: the Schooner Aurora. If you haven’t booked tickets yet, buy them here. Or, head to the lawn of the Safari Room overlooking Narragansett Bay for a spectacular view and incredible fireworks display.

Newport Music Festival: As melodies of the music festivals commences, Newport welcomes musicians around the world for a series of performances.

Hall of Fame Open: Each year, top ATP World Tour pros head to Newport to compete in the Hall of Fame Tennis Championships, the first stop of the summer swing for pro tennis in the United States. Contested on the historic grass tennis courts of the International Tennis Hall of Fame, which have hosted all the legends of the sport since 1880, the tournament is the only event played on grass courts outside of Europe, and it offers the only opportunity to see professional men’s tennis in the Northeast prior to the US Open. The tournament is held at the International Tennis Hall of Fame, Newport from July 15, 2018 – July 22, 2018.

Newport Folk Festival: The Newport Folk Festival, founded by George Wein in 1959, takes place on the grounds at Fort Adams State Park from July 27 – July 29 and features four stages of world class musicians, food, vendors and a number of exhibits. Fort Adams is located at 90 Fort Adams Drive, Newport, RI. One of the park system’s national treasures, Fort Adams is situated at the mouth of Newport Harbor with panoramic views of the Newport Bridge and the East Passage. The festival runs rain or shine.